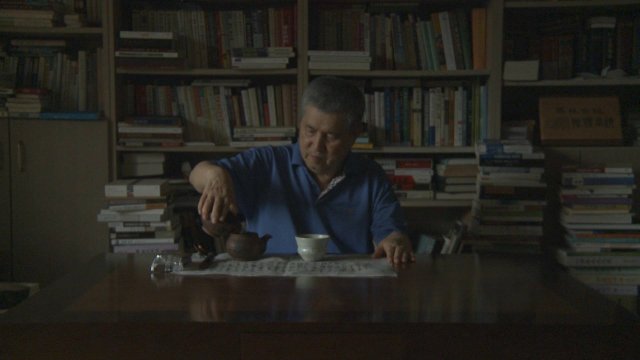 In the opening scene of "Gravity of the Tea" we watch as famed director Im Kwon-taek attempts to drink tea, his hands quivering so much that I started to wonder whether he was going to drop it. Director Jung Sung-il never really gets around to asking Im Kwon-taek questions about his craft. We just kind of watch Im Kwon-taek ramble at various intervals about vaguely film adjacent subjects. For the most part, though, Im Kwon-taek just sits or sleeps in silence.

A whole lot of this documentary is obviously built around Im Kwon-taek as this legendary icon, who finishes one project and then moves on to the next, until eventually he's somehow managed to make a hundred films. His anecdotes are generally unremarkable outside of this fairly critical context, making him sound more like a tired old grandpa telling stories about the old days than a man who's a master of the form. Even in his most animated moments, director Im Kwon-taek feels weirdly rehearsed, like he's working largely from sense memory.

Far from feeling like a legend, Im Kwon-taek comes off as terrifyingly mortal and human. In the few scenes featuring other people Im Kwon-taek is indistinguishable from the crowd. It's surreal to think of a famous name like Im Kwon-taek just going to church, greeting his neighbors in fellowship, and going home. This mundanity is partially fascinating, although the sheer length of the movie's unremarkable shots will almost certainly inspire pangs of boredom in typical filmgoers.

If read from a context divorced entirely from his reputation as a filmmaker, "Gravity of the Tea" is just a documentary about how a relatively well-off older Korean man lives. He takes a lot of naps, tells stories to people who want to hear them, and is accompanied by younger people to social events. There's a powerful resignation to Im Kwon-taek's attitude, like he's just accepted that this is what it's like for him to be an old man, where his main passion is inspired by familiarity.

Further adding to the documentary's timelessness is the fact that "Gravity of the Tea" was filmed almost entirely in 2012. By the time we get to the end Im Kwon-taek has gotten started on "Revivre", which was his last major film. Im Kwon-taek speaks in the planning stages much as he does everywhere else, in a way that only feels authoritative if you have any idea who he is. "Revivre" is, for what it's worth, rather enhanced by "Gravity of the Tea" as we can see how both films demonstrate a similar thought process in regards to resigned mortality.

Unfortunately I can't imagine you're going to get a whole lot out of "Gravity of the Tea" unless you've actually seen much of Im Kwon-taek's work, as director Jung Sung-il provides precious little context as to who Im Kwon-taek even is. Watching this documentary is like reading a love letter out of context. The sentimental feelings are definitely there, but without more firsthand knowledge, the imagery is largely abstract, more useful for the sake of historical context of the now long-gone year of 2012 than anything else.