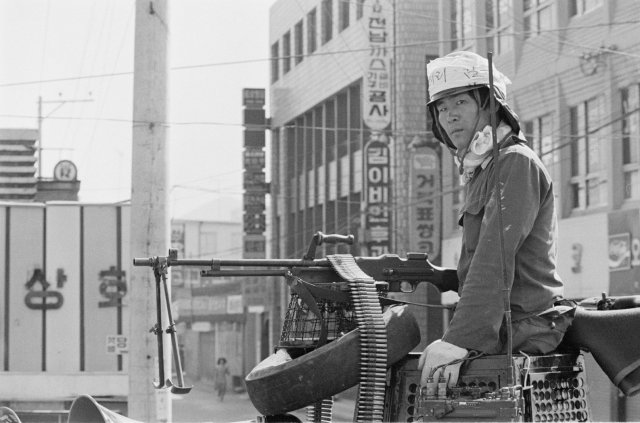 In 2015 a South Korean right-wing group claims that some six hundred demonstraters in the Gwangju Uprising were actually North Korean special forces operatives. This conclusion was arrived at through digital facial analysis software. So begins the search for the titular "KIM-GUN", one distinctive young man from those pictures whose apparently unknown identity is used as proof of concept for the conspiracy theory.

"KIM-GUN" isn't really actually about the conspiracy theory. Director Kang Sang-woo does well to use a lot of the right wingers' original footage here, because the sheer bombastic and absurd nature of the claims is obvious without a rebuttal really being all that necessary. Mind, I still liked the rebuttals. One normal citizen points out that if several hundred North Korean operatives had snuck into Gwangju then South Korean Intelligence either incompetently failed to notice them or equally incompetently failed to warn anybody actually in Gwangju that they were under attack from a legion of spies.

But by and large "KIM-GUN" isn't really a political documentary at all. It's mostly just a nostalgic look at the Gwangju Uprising through the framing device of, who was that guy? Does anyone remember? Imagine being shown a picture of someone you briefly knew socially or saw in the background for maybe a week or so during a highly charged emotional period of your life. That's what "KIM-GUN" amounts to, is interviews and anecdotes along these lines.

This creates a bitter contrast against the right wing propaganda that makes up the earlier part of the documentary. When ex-army officials points to pictures of masked guerrillas and question the use of masks, and ask why these supposed democratic activists are afraid of showing their faces, this betrays an alarming notion of legitimacy. To these career soldiers, anyone wearing a proper pressed uniform is the good guy. Anyone who can explain where their gun came from is a good guy. What a person actually does with their uniform or their gun is besides the point, and has no moral relevance.

It doesn't take much imagination to imagine what legitimate reason a person might have for covering their face up. This is spelled out all too clearly when, after much investigation, director Kang Sang-woo is able to get three witnesses who all saw "KIM-GUN" together in the same movie theater. The casual way which they discuss what must have been several succeeding moments of abject terror is...more than a little frightening.

Pretty much anyone that age or older in Gwangju today has some variation on that life-changing story. They all lived through that moment, which bitterly challenged their assumptions about the power of justice and righteousness when faced against overwhelming military force. More than anything else, though, the documentary is just filled with regret. Not like, regret that they could have or should have acted differently, but a more generic regret about innocence lost. This retrospective vision on the inherently tragic nature of history is, curiously enough, completely absent from the right wingers who see violence as an ends rather than a means.