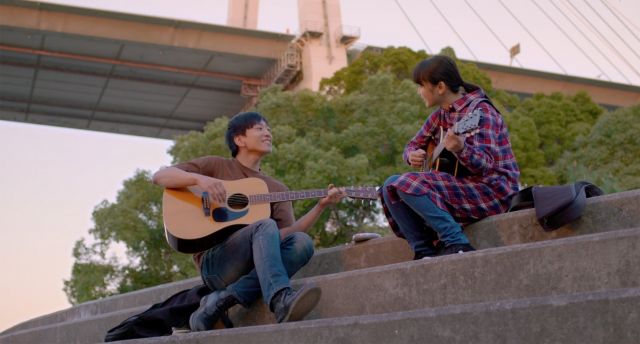 Woozoo (played by Kang Doo) is a company worker. I wasn't totally clear on what Woozoo's company actually does, but apparently they do a lot of business in Osaka, since that's where Woozoo hangs out for pretty much the whole movie. Almost all of the dialogue is in Japanese. Incidentally, Woozoo is a really weird way to transliterate that name. Usually it's just written in English as Woo-joo. That name has the same common meaning as universe, although the Chinese characters probably mean something more poetic than that.

Anyway, as per the plot, Woozoo ends up spending way more than he intended to at a local guest house by the name of Pier 34. He ends up deciding to just not bother going back to Korea at all and just bums around playing the guitar. I guess there's also a mystery wrapped in there because Woozoo sees a random guy in the street who vaguely reminds him of some guy from his company. Then there's Haruna (played by Hori Haruna) who's also playing guitar for her...dad or something I guess.

Even though nearly every other scene in "The Goose Goes South" is just exposition, the plot never goes anywhere. You might think that, as the male and female leads, Woozoo and Haruna would have some kind of romance. But then Haruna just disappears for large stretches of the movie, and other characters have to explain Haruna's backstory in her absence. In all fairness, Woozoo's quest to find that random guy in the street is also largely undertaken by the supporting cast.

Not that we actually get to see anybody do these things, mind you. The most we ever get to see Woozoo and Haruna do is play the guitar, and in one critical scene one of them manages to avoid even doing that much. This would be less ridiculous except that we almost never actually get to hear either Woozoo or Haruna play the guitar. They just practice a lot, and any attempt at a serious song is always played over in montage.

There's so little going on in "The Goose Goes South" I'm honestly very perplexed as to why this movie was even made. The best explanation I can come up with is that the movie is intended to promote tourism in Osaka. Although even that's a pretty mixed message. I'm not sure I want to visit a city where it's common to see drunk foreigners with guitars passed out on neighborhood playgrounds.

That big ferris wheel in the background that keeps getting emphasized looks pretty fun though. Too bad we never get to see it up close. "The Goose Goes South" is like that with pretty much all of its plot hooks really. There's a voyeuristic quality to parts of the story that might be interesting, yet instead of actually developing the drama, the script just blithely repeats the same points again and again. That's how "The Goose Goes South" manages to be almost two hours long without anything actually happening.