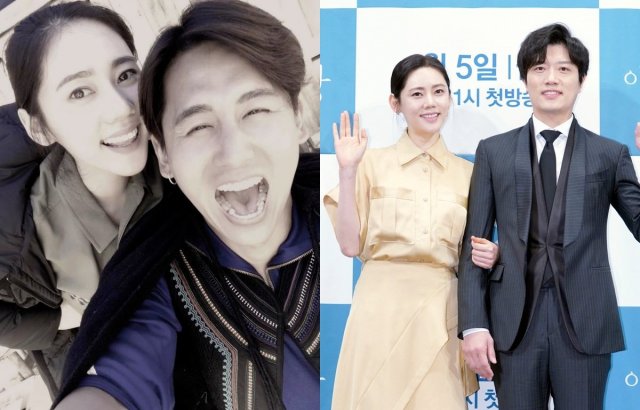 At a press conference for "Beautiful World" on April 4th Choo Ja-hyun spoke positively of her co-star, Park Hee-soon. She also made reference to her real-life husband, Yu Xiaoguang. The specific quote was, in real life as well as in dramas I've been lucky with husbands.

The statement is somewhat ironic, given the dark context of "Beautiful World". In the drama Choo Ja-hyun and Park Hee-soon play parents who are dragged into school violence as their son becomes involved in an assault case.

The drama represents a comeback of sorts for Choo Ja-hyun, who as of late has been doing more variety programs. The social justice oriented nature of the drama piqued her interest, although Choo Ja-hyun said that the subject matter made her nervous. Choo Ja-hyun said she felt much more confident after her first meeting with writer Kim Jee-woo and director Park Chan-hong.

Still, Choo Ja-hyun said that she trembled during the first shooting, and that she hadn't trembled so much since her debut, or even while she was the emcee for a live broadcast. However, Choo Ja-hyun continued to receive strong encouragement from director Park Chan-hong as well as the rest of the production team, which allowed her to continue.

Choo Ja-hyun describes her character In-ha as being someone who endures, comforts, and hugs. But also, she struggles physically and emotionally. Choo Ja-hyun also said that In-ha was a character of a lifetime of acting. Her hopes were high.

As far as Park Hee-soon, Choo Ja-hyun described him as being very supportive, and a great actor, helping and encouraging her with every respect. Choo Ja-hyun said she was impressed, and felt that he helped her performance tremendously. She thanked him deeply for this support, which was where the dual husband quote comes from.