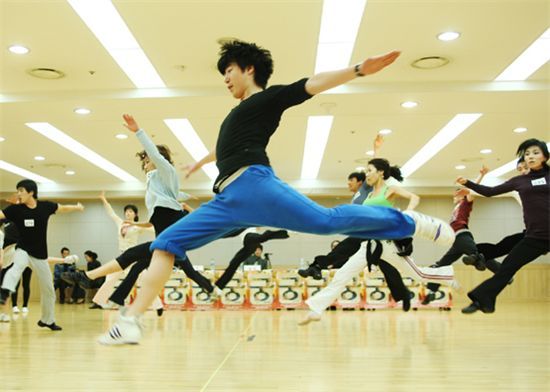 Actors rehearse for the musical adaptation of "Goong" [Group 8]

Song Byung-joon hopes "'Goong' will set a good example for musical adaptation of dramas"
"Everybody makes mistakes on the stage. Don't try to make it obvious when you make one. Don't stick your tongue out because you got it wrong". In the rehearsal room at the basement of Chungmu Art Hall, some 40 male and female actors dance to music under the direction of choreographer Oh Jae-ik. Number 46, 92, 116... These people are the contestants for the second audition of musical "Goong", which premieres September 3 in Theater "Yong" at the National Museum of Korea. After the first audition, for which some 300 people applied, 80 people who made the second round were split into two teams and were tested again in dancing, singing and acting all day.

In 2006, MBC TV series "Princess Hours" (written by In Eun-ah, directed by Hwang In-roi), based on artist Park So-hee's comic series of the same title, was adored by viewers for depicting a romance between an ordinary high-school student Chae-kyeong (played by Yoon Eun-hye) and prince Shin (played by Ju Ji-hoon) under the fictional pretext that Korea was a still a monarchy country.

Producer Song Byung-joon, CEO of production company Group 8, started planning a musical version of "Goong" last year, and musical director Kim Jae-sung who previously participated in many musicals including "Rent" and "Hairspray" signed on to direct. Director Kim Jae-sung explained, "If the drama used camera work to show the emotions of characters, I intend to use music to express that in the musical. I would also like to show the depth of Korean culture such as the beauty of the [traditional Korean costume] Hanbok while bringing the fantasy within virtual reality to life. Instead of making it too heavy or dramatic, I am going to create a musical that the audience can watch comfortably, like a show, yet one where the emotions of how the characters love and mature come to life". Will the musical version revive the glory of drama "Princess Hours", which combined the fresh idea of an original comic series and direction of Hwang In-roi to put two newcomer actors Ju Ji-hoon and Yoon Eun-hye onto stardom? The following is a one-on-one interview with CEO Song Byung-joon, who is the chief creative director for musical "Goong".

10: What motivated you to produce the musical "Goong"?
Song Byung-joon (Song): I think it is time for a musical version since artist Park So-hee's original comics "Goong" was made into a drama and introduced throughout Asia. I think "Goong" is the most appropriate story to be made into a musical since it is based on virtual reality where classic meets modern. I was the music director for 1993 hit musical "Save the Last Dance for Me", which was directed by Hwang In-roi and written by Joo Chan-ok, and I really wanted to make "Princess Hours" into a musical so I took on the challenge of creating another original musical. 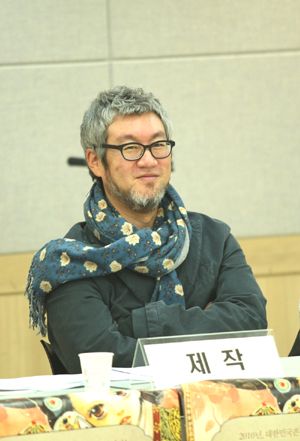 10: Even dramas "Dae Jang Geum" and "Queen Seon-deok", which were commercial hits, did not succeed commercially nor artistically when they were made into a musical production. Isn't there a limit to achieving success in a different genre even when you start with the same story?
Song: Dramas that crossed over genres and were made into musicals weren't huge successes, but that is actually what makes it appealing. I have the ambition that 'we could set a good example' and I am confident. I believe that it will work out well. We are already receiving numerous inquires from all around Asia and tickets have started selling in Japan.

10: You have about six months left till the opening day. How is the overall process going?
Song: Writer In Eun-ah, who wrote the television series, is in charge of the script and is editing the second draft, and I think we will go into designs by the time the third draft comes out. Production designer Min Eon-ok of the [TV series] "Princess Hours" is in charge of art direction again. Haul, who participated in the original soundtrack [for TV series], is the music director and we have set all the other staff as well.

10: In the case of art direction, the drama set such a high standard that you must feel pressured to have to show more than that.
Song: You have to take into consideration the various function the stage itself takes on including how it is used for act transitions or symbolization, so it will be hard to expect the 'goong' [meaning 'palace' in Korean] that you saw from the drama. But Min Eon-ok is an exceptional stage art expert, so I believe she will solve that problem well.

10: The drama ran pretty long -- 24 episodes. How are you creating the storyline for the musical?
Song: I think the whole musical will run for about two hours with a little more time invested in the first part. The first act will be about how the female lead enters the palace and becomes one with the prince -- that is the first half. And the second act starts with their union and builds up on tempo with the conspiracy and conflicts in the latter part. If the first part empathizes on dream, hope and laughter in a charming and fun way, I'm planning to speedily sum up the competition structure, schemes and romantic ups and downs in the latter half.

10: How are the auditions going?
Song: Extremely well. When we did the musical "Save the Last Dance for Me" in 1993, there were outstanding musical actors like Nam Kyung-joo and Choi Jung-won-I but the pool of musical actors were very shallow, almost barren. But a long time has passed and so many improvements have been made that there are a lot of talented actors now. Many newcomers and existing musical actors are auditioning and I think we'll be able to select the best characters.

10: The drama "Princee Hours" is very well-known, but I think you need star power of the musical actor for the musical to succeed. Are you considering to hire idol group singers like other musicals?
Song: Many people say that in order to sell tickets for performances in other cities, you need to cast someone famous to get the ticket reserved. Well, idol group singers are fine too. They have the basics skills ready in dancing and singing, and like I used former idol group singer Yoon Eun-hye in the drama, there is no reason not to hire them. But I'm planning to hire an actor based on talent and image, regardless of their fame, who is perfect for the role -- just as how I handled the casting for the drama. In that sense, I would pick an idol star if he is perfect for the musical and can work hard for the part, but first I plan on providing a fair opportunity for everyone.

"[INTERVIEW] Producer Song Byung-joon of musical "Goong""
by HanCinema is licensed under a Creative Commons Attribution-Share Alike 3.0 Unported License.
Based on a work from this source