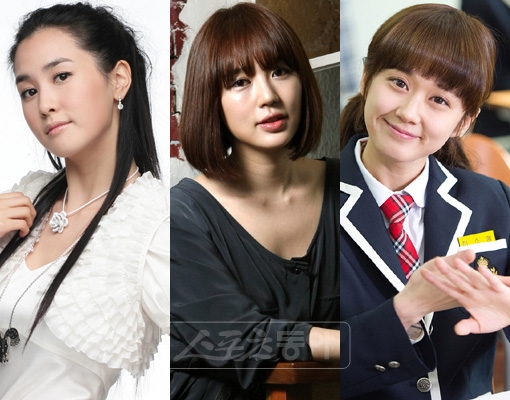 Who is the best liar?

The three have come back to home screens together. They are to compete in the 3 company's with dramas that all start in May. As if they planned on it, the three have all returned with roles that have to do with lying.

Coming back in 2 years in Yoon Eun-hye with SBS "Lie to Me" as Gong Ah-jeong. She lies that she is married to be able to achieve the things only married people can and gets caught up in unexpected incidents.

She is currently in the middle of shooting the drama. She also had a picture of her running around in a blue sweat suit revealed.

Jang Nara returning to home screens in 5 years after the 2005 drama "Wedding" is also a liar.

She will play unmarried woman So-young in "Babyfaced Beauty" who goes through the rough unemployment phase. She lies about her age seven years below her real one and gets a job. She is actually born in the year 1981 and is 31 this year. However, thanks to her young looks, she is still considered one of the youngest looking stars despite their age.

Lee Da-hae is a character to fails her life with a lie. She lies after lies and lies in the MBC "Miss. Ripley" as Jang Mo-ri. This drama is based on the Sin Jeong-ah case, who is already widely known to be a liar in her education and caused uproar in society.

"Lee Da-hae, Yoon Eun-hye and Jang Nara 3 lies battle"
by HanCinema is licensed under a Creative Commons Attribution-Share Alike 3.0 Unported License.
Based on a work from this source