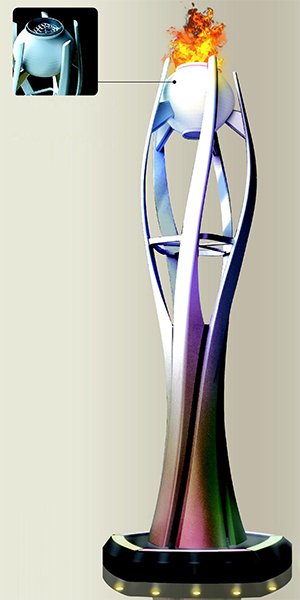 The opening ceremony of the 2018 Winter Olympics in Pyeongchang on Feb. 9 will take the form of a fairytale adventure through Korea's culture and history.

"We aim to project the country's passionate pursuit of peace and harmony", said Song Seung-hwan, the creative director of the show, on Wednesday. "Through children's exploration of Korean culture and history, we will evoke a world made peaceful by the power of communication and connection".

Five children will go on an adventure through five millennia of Korean history, taking in several high points along the way and ending on a note of hope and harmony.

Executive producer Yang Jung-woong said, "We can't reveal more details about the content due to IOC regulations, but cutting-edge Korean technologies will be used in the show including augmented reality, fifth-generation mobile communication, and drones".

The closing ceremony on Feb. 25 will be titled "Next Wave".

The Olympic cauldron at the Olympic Plaza in Pyeongchang was inspired by Korean traditional moon jar, with Five Fingers holding it up. French cultural pundit Guy Sorman has praised the moon jar as epitome of Korea's unique sense of beauty and technology that cannot be found anywhere else in the world.

To help visitors endure the cold in the stadium, organizers said windproof jackets, fleece blankets, heat-generating cushions, hand and feet warmers and hats will be given out for free, and wind shields and heater as well as heat shelter will be installed.

Kim Dae-hyun at the organizing committee said, "The organizers of the 1994 Lillehammer Games, which is recorded as the coldest Winter Olympics to this date, asked visitors to dress warmly. We ask visitors to Pyeongchang to do the same, wear thermals and a scarf, and dress appropriately for cold weather".

Some things will be banned from the stadium including liquids, non-transparent containers, large camera lenses, tripods and firecrackers.

Asked whether visitors can bring the national flag despite North Korea's participation, Kim said, "It is only right for any South Korean to bring a taegeukgi, or the unification flag if they wish. However, under the National Security Law, the North Korean flag is not allowed".