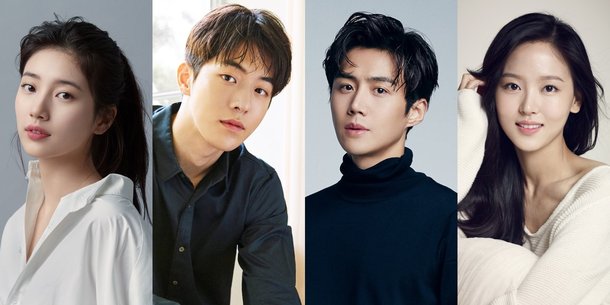 The cast for "Start Up" is complete with Bae Suzy, Nam Joo-hyuk, Kim Seon-ho and Kang Han-na.

The new tvN Saturday-Sunday drama "Start Up" is a drama that depicts the beginning (START) and growth (UP) of young people who start their own businesses dreaming of success in Korea's Silicon Valley Sandbox.

The drama will show the challenge and growth as well as romance of youths despite the weariness of reality. "Start Up" is dircted by Oh Choong-hwan and writer Park Hye-ryeon. Along with the colorful cast lineup, the drama fans won't be able to miss this powerful combination.

Bae Suzy plays Seo Dal-mi, a young woman who dreams of becoming a Korean Steve Jobs. Dal-mi, who has nothing but scale, starts a "Start Up" with dreams of 'reversing' her fate. Seo Dal-mi has lots of experience in various part-time jobs and has an unrivaled living ability. How she overcomes the hardships is looked forward to.

Nam Joo-hyuk plays Nam Do-san, the founder of Samsan Tech and a left-brained human. He was once the pride of his family as a math genius, but now he is on the verge of being a disgrace to his family, as he has only been losing investment money for two years. Unintentionally, however, he becomes a 'cool first love' in Seo Dal-mi's memory, making the misunderstanding a reality and challenging the "Start Up" to 'shine again'. Attention is drawn to the 'nerd-beauty' standard, which will be presented by Nam Joo-hyuk, who transforms his acting through this character.

Kim Seon-ho will play the role of Han Ji-pyeong, who 'starts up' to 'pay off debts'. Being the head of the SH Venture Capital's senior team, he is called Gordon Ramsay in the investment world for his ghostly investment skills and biting remarks. As poisonous as he may seem, he becomes gentle to people who helped him out in the past. We are looking forward to Kim Seon-ho's wide acting spectrum, which will fully revive the charm of Han Ji-pyeong, who will go back and forth between sly and gentle beauty.

Kang Han-na takes on the role of Won In-jae, a CEO who has everything from education to looks and fortune. The title of being a second generation chaebol is a disadvantage to her name so she struggles to achieve results and get acknowledgment but ends up getting 'hunted down' by her rich father. She attempts at 'start up' because she doesn't want to be a dog that gets abandoned after hunting.

The line-up makes things more interesting. Anticipation rises for what obstacle each of the characters will face by jumping into "Start Up".

"Start Up" premieres in October.

""Start Up" With Bae Suzy, Nam Joo-hyuk, Kim Seon-ho and Kang Han-na"
by HanCinema is licensed under a Creative Commons Attribution-Share Alike 3.0 Unported License.
Based on a work from this source