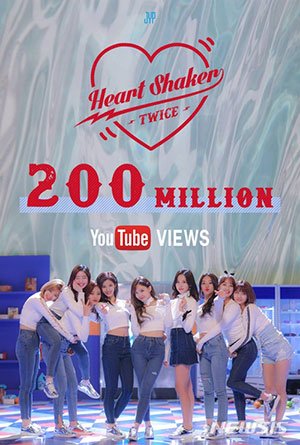 The song "Heart Shaker", the title track of their compilation album, reached the milestone about seven months after its release in December last year, according to their management agency JYP Entertainment.

"Heart Shaker" became the fifth music video by the group to achieve the feat.

Their trademark song, "TT", became the first music video to get more than 300 million views in December last year.

The music videos for "Cheer Up" and "Like OOH-AHH" reached 200 million views in August and November last year.

"TWICE's Latest Music Video Hits 200 Million Views on YouTube"
by HanCinema is licensed under a Creative Commons Attribution-Share Alike 3.0 Unported License.
Based on a work from this source