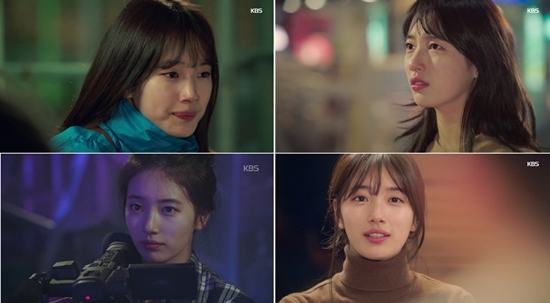 The revealed teaser trailer shows Bae Suzy (Playing No-eul), who has transformed into a documentary producer and filming the concert of the superstar Kim Woo-bin (playing Sin Joon-yeong).

Bae Suzy truly embodied the emotion of a woman who fell in love with a man perfectly in the brief moment as she transferred her gaze from the camera lens to Kim Woo-bin performing on the stage.

With her face without make-up and the carefree ponytail, Bae Suzy still looks radiant. It is expected that Bae Suzy and Kim Woo-bin will captivate the drama fans' hearts in the second half of this year with such a fabulous couple chemistry the pair will create.

Bae Suzys sweet loving eyes in the third teaser released after Kim Woo-bin's confession of love and the sweet 'knee pillow' scene are heating up the online communities.

"[Video] 'Uncontrollably Fond' unveils new teaser: Bae Suzy looks beautiful as ever"
by HanCinema is licensed under a Creative Commons Attribution-Share Alike 3.0 Unported License.
Based on a work from this source