Actress takes off mask in 'Woman on the Beach' 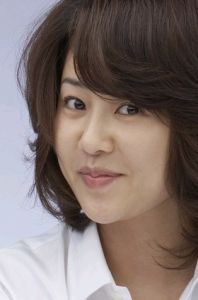 Director Kim Jong-hak of Korea's cherished drama "Sandglass" (1995) said that she was a "destructive actress who can overturn the whole scene with a blink of her eyes", while author Song Ji-na said that as an actress, she was a femme fatale with deceiving naivety. But to us, actress Go Hyun-jung was - more than anything - a golden girl who captured the heart of a young millionaire.

Of course, we had all known that Ko was a fine actress. But the title no longer suited this former beauty pageant winner when she suddenly married Shinsegae vice president Jung Yong-jin just after receiving a standing ovation for her fantastic acting in "Hourglass".

In a stunning yet delicate high-necked gown, Ko had walked down the aisle and looked as though she would never return to the public eye. Then, after a decade of silence, she suddenly wanted to be an actress again.

Go Hyun-jung
Earning beauty, fame and money at the age of 24, and going through a messy divorce after her eight-year marriage broke down, Ko's comeback was a juicy source of gossip for middle-aged women at beauty salons. Despite the success of drama "Spring Days" last year, rumors never seemed to die down. Naturally, when this 35-year-old actress chose Korea's "naughtiest" filmmaker Hong Sang-soo's seventh movie "Woman on the Beach" as her next project, people focused on how much of her nude body would be seen.

As a little spoiler, the only nudity audiences will get to see in the movie is Ko's bare hands and ankles - but she still makes it worth seeing.

"Woman on the Beach" is probably director Hong's easiest, funniest, jolliest movie which still covers the most "Hong-like" subsequences in a familiar format. As another one of Hong's gloomy romances, the movie revolves around a young filmmaker - Hong's alter ego - and the two women he meets.

But amid the familiar - and thus, often boring - format, unexpected laughter is generated from the character of Kim Mun-suk, played by Ko.

Ko is still as beautiful as ever in the movie - but only if you find women with puffy eyes, a swollen face and tangled hair attractive. In the movie, Ko is neither serene nor elegant. She is too dumb, too easy, too pushy and most of all - way too ordinary.

Watching Ko's elegant mouth swearing, and asking, "Isn't my face too big? I wish I could just cut it off", without a trace of a smile, one can see that her exhausting life experience has made her a mature actress.

Ko may no longer be the dazzling beauty she was in "Sandglass", but through personal experience, she seems to have achieved a certain depth in acting - something that goes beyond inborn talent.

"Unconsciously, I was looking for works that gave me a certain 'tingle'. I realized that I was looking for roles that portrayed my own thoughts and past experiences in them", Ko had said at the preview of her first movie.

The character Mun-suk is a product of endless conversations between director Hong and Ko.

As widely known, Hong does not use prepared scripts. Heading off to a destination empty-handed, Hong writes one or two pages of lines on the spot and hands them out on the day of shooting.

"I usually create 50 percent of a character in advance and fill the rest up along the way. Ko was an actress who was ready to blend in with anything. She was amazing", Hong had said, explaining how he and Ko had created Mun-suk together.

With Ko, Hong could come up with a more understandable woman character. In his previous movies, woman characters had been somewhat vague and passive but Mun-suk is neither.

After finding out that her lover Jeong-rae (Kim Seung-woo) is sleeping with another woman, she tries to break down his door screaming at the top of her lungs. At her defeat, she drinks, cries, shouts and swears just like an "ordinary" woman.

When Jeong-rae tries to cover up his infidelity with a ridiculous philosophy of images and essence - how certain "wrong" images can get in the way of seeing the person's essence - Mun-suk gives him a sardonic smile and says, "That's bullshit".

To audiences who are used to Ko's image, Mun-suk is a shocking character - and even more so after hearing that the Ko projected a lot of herself into the role.

But come to think of it, it wasn't Ko who built up her current image. Even in her past TV dramas "Sandglass", "Mother's Sea" and "Fearless Love", Ko had always been an outspoken woman who didn't hesitate to slap an arrogant guy's face and spit on the ground to mock the world. The audiences were mostly on their own forming such prejudiced views of her.

With help from director Hong, this passionate - yet surprisingly ordinary - actress has finally peeled off her mask of dazzling beauty and a flashy marriage that had clung to her for so long. Pleased to meet you, the "real" Go Hyun-jung.

"Actress takes off mask in 'Woman on the Beach'"
by HanCinema is licensed under a Creative Commons Attribution-Share Alike 3.0 Unported License.
Based on a work from this source