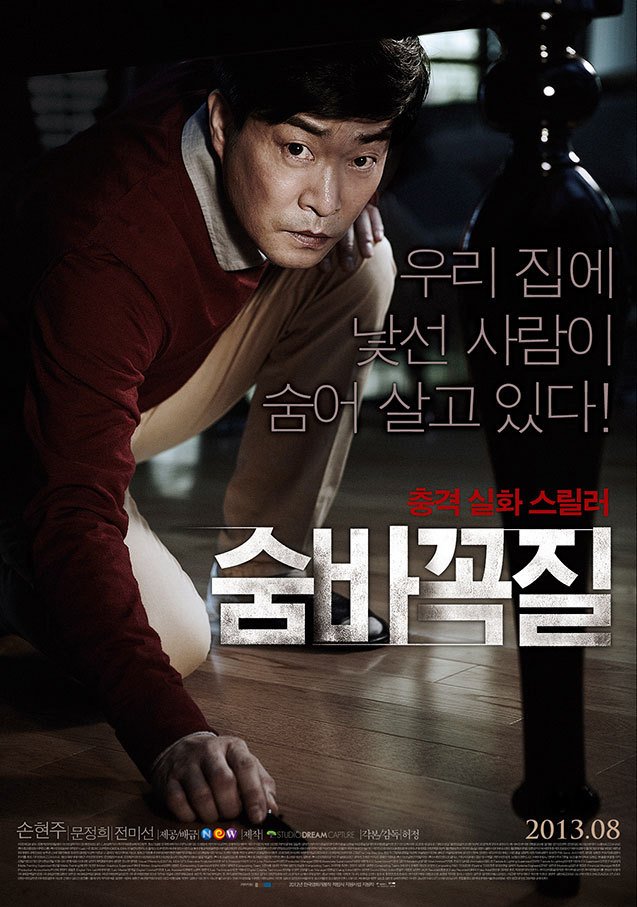 It was an all Korean affair at the box office this past weekend, with the top four performers all boasting Korean origins. Bong Joon-ho's "Snowpiercer", last week's number one, fell to third in what was a highly competitive weekend at the top. But it was Huh Jung's thriller "Hide and Seek" that came away with the highest honours, opening its account with 1,353,185 (34.2%) admissions. Following Huh's debut effort with 970,229 (24.4%) was the disaster movie "The Flu", director Kim Seong-su's third major feature. "Snowpiercer" and "The Terror Live" filed in at third and forth respectfully, ultimately making the top four an exclusively Korean affair that held almost 90% of all the ticket sales.

"Hide and Seek" is the first full-length feature from Huh and tells the story of Seong-soo (Son Hyun-joo), a successful business man who attempts to track down his brother who enigmatically disappears under unusual circumstances. The film also stars Moon Jung-hee as the brother's friend, and together the two follow the mysterious clues left at Seong-soo's brother's apartment to locate the estranged sibling. Last year Huh produced a twenty-seven minute short film entitled "The Wish" which was shown at both the Jeonju International Film Festival, as well as the Puchon International Fantastic Film Festival. His debut effort seems to be having the perfect start, outplaying three massive features to put itself firmly the spotlight.

Of all the films showcased this week, "The Flu" was allocated the most screenings (806) but found itself unable to surpass Huh's enticing thriller. This biological disaster film claimed 970,229 (24.48%) over the weekend, moving Kim Seong-su's third feature to 1.8M admissions since its release last week. Leading the survivors in this one is the drama/movie star Jang Hyuk, Soo Ae, and the adorable child actor Park Min-ha. The film's premise is simple enough; a deadly virus that kills within thirty-six hours hits Korea, causing massive panic and death. The film plays on the nation's almost obsessive fear of germs, specifically that of the flu virus. "The Flu" has already been confirmed for a U.S. release, but for now its home crowd are thoroughly enjoying Kim's flu-induced action and drama disaster.

Last week's champs "Snowpiercer" and "The Terror Live" continued on their splendid paths of fortune. "Snowpiercer" may have been forced to jump down two places, but the film still managed to score 695,985 (17.98%), while its contemporary "The Terror Live" pulled 479,75 (12.38%) of its own. Those figures are high for a third and forth finish, resulting in the top four this past weekend claiming nearly 90% of all the ticket sales. Bong Joon-ho's sci-fi epic now moves onto 8.1M, making it now the second highest grossing Korean film of the year behind "Miracle in Cell No.7" (12.8M), all in just three weeks. "The Terror Live" is also climbing that list and moved from tenth to sixth with its total tally of now over 5 million.

The highest foreign finisher was the English animation "Epic" which followed "The Terror Live" to settled at this week's number five. The film snatched just 175,514 ticket stubs away from the local hits but is still reaching out towards the million admissions mark. In a rare turn of events, all six of the foreign films that made it into the top ten this week are animations. In addition to "Epic", Korean viewers choose to balance the thrilling and hard-hitting action of their local flavours with a string of animations from the U.S., Russia, and Japan. In addition to "Epic", Team U.S. put fourth "Turbo" (79,621) and "The Smurfs 2" (62,699), while the Japanese came to the fold with "Detective Conan: Strategy Above the Depth" (60,658) and "The Garden of Words" (13, 834). Lastly, the Russia film "Wings" scored 15,392, which was good enough for ninth during this highly competitive time.