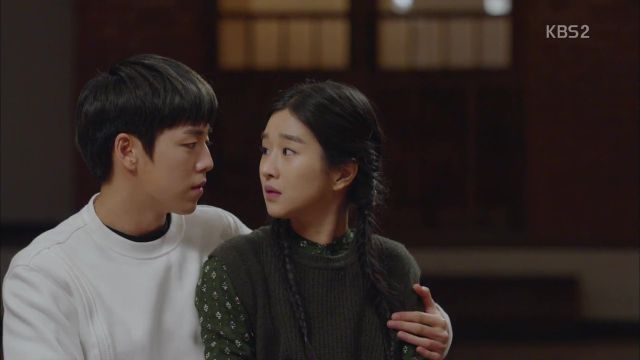 "Moorim School" episode 11 is all about looking within to find the answers. There is a big competition going on and everyone is vying to win, but winning isn't the answer. To attain the keys to the Chintamani is the outward goal, but the true teachers at the Moorim School want their students to find strength within to protect those dear to them.

Si-woo is struggling to control a rare power that he possesses. It's strength lies in that he doesn't have to hurt others, his friends and loved ones. What is beautiful about his determination is not that he is strong enough to have it, but that his mindset is affecting other people, namely Chi-ang. Chi-ang is under pressure to please his father after a lifetime of rejection. It's going to take a lot to get him to change his ways. In a way, his struggles fuel Si-woo's determination. Ultimately this story is about these two friends learning to find their paths, and how their journey pulls others alongside them.

I do wish we had more dialogue between the friends rather than brooding staring contests. Their exchanges are the most enlightening. And their moments of friendship. We need more of them to make their estrangement more poignant. For example, this episode had both boys seething in jealousy over Soon-deok's affections for a sunbae. Their mutual feelings brought them together for some much needed bromantic time.

The bad guys of this show are ridiculously clear, complete with bad guy smirks. All we need is a cackle. Old Teacher Beop is the caricature of a villain and he makes me wish for another cameo from Lee Beom-soo. Until then, we have at least been made privy to flashbacks of cowardice in regards to Soon-deok's father, the man who saved Si-woo from the fire and then left him in the woods when he thought the child had died.

Although Si-woo is the obvious hero in this story with the even-keeled thought processes, the magical powers, and the girl, it is Chi-ang who is especially interesting. He's fighting circumstance, his pride, and serious outside pressure to become like his father, the man who has caused a lot of tragedy in the lives of our characters. Chi-ang could go darkside, and that makes him a very interesting wildcard that I hope the show plays on.