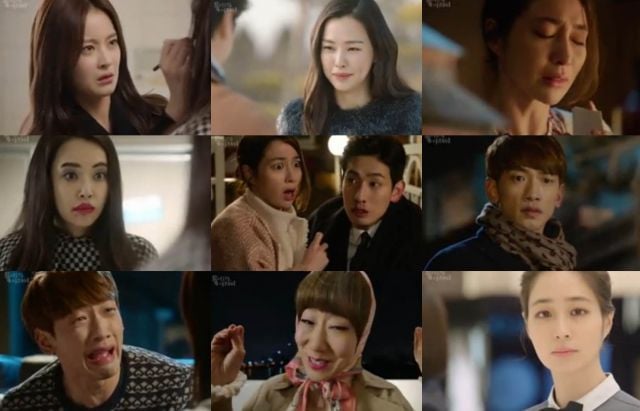 For their superficially wildly different personalities, Yeong-soo and Gi-tak have one thing in common- they're both prone to jumping to wild outrageous conclusions based on limited evidence. Come to think of it they even acted this way back in the first episode, when they were still alive. It just didn't come off as quite so ridiculous back then because Kim In-kwon looks like a pathetic guy who can be intimidated, and Kim Soo-ro looks like an ultra-masculine man who is not to be trifled with. Rain and Oh Yeon-seo, by contrast, look like they should have some shred of classy dignity.

Truthfully, I find this sort of antagonistic humor to be one of the more annoying parts of "Please Come Back, Mister" on account of the fact that it's pretty obvious in advance that Yeong-soo and Gi-tak are overreacting. It's embarrassing watching Yeong-soo act petty and mean when it's perfectly obvious that the situation is not what he thinks it is. And besides, like Maya says, revenge is strictly banned.

But then there are scenes like the flashbacks, which show that Yeong-soo used to be on the receiving end of brutal teardowns, so I'm not sure to what extent "Please Come Back, Mister" is being ironic. Other scenes like Gi-tak's extremely fast and not entirely convincing apology also appear to be stating that our lead characters have definite attitude problems. Yet for all this, we're not seeing much growth. Da-hye and I-hyeon have more clearly defined arcs than the leads do so far.

Even so, Yeong-soo and Gi-tak are making progress. It's telling that Yeong-soo faced more resistance for questioning the suicide report than he does for bullying staff. And Gi-tak finally gets a chance to show off some of the skills of his past life. Even better, I-hyeon press gangs Gi-tak into an activity that will hopefully restore some of the man's former combat ability. I'm expecting it to come up in one of those imaginary scenes, only we (and Gi-tak) are suddenly surprised to see the fight actually went as planned.

Those scenes are jokes, of course, and it's useful to keep that much in perspective. "Please Come Back, Mister" is a drama about silly jokes, and even if there's a sort of catharsis as I-hyeon is dealing with serious personal stress, around the corner Gi-tak is ready to relieve some of that burden, however unintentionally, by not acting like a proper woman should. For the moment, I find the characters in "Please Come Back, Mister" to be more sympathetic than annoying.