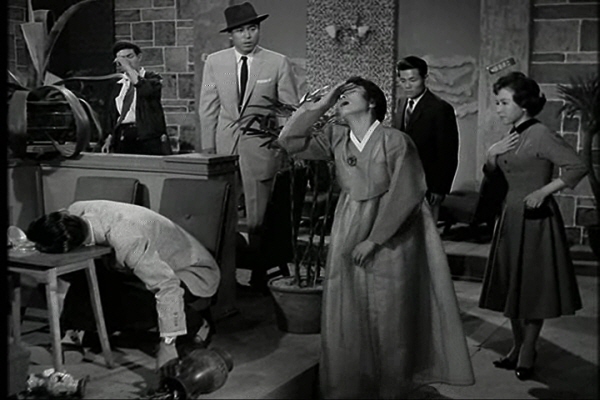 Having women protagonists and issues that deal with the place of women in Korean society was not exactly common ground in the 60's (as is also not now), so it comes as a surprise that Gwon Yeong-sun directed a film like that, although the premises are anything but feminist.

The movie begins with a rather intense trial scene, with Hyeon-hee, the protagonist, being accused for murdering a customer, Choe Yeong-cheol, at her dabang, after overhearing a discussion of him with a foreigner that involved selling her to him. The judge does not take well to her justification, but before the verdict is announced, a flashback of her story begins.

Hyeon-hee is a mother to an illegitimate daughter, a fact that has not allowed her to pursue a "proper" career, despite the fact that she is a college graduate. Instead, she takes a loan and opens a dabang in order to sustain herself, along with her daughter and elderly mother. At one point, she falls in love with one of her customers, editorial writer Lee Sang-hyeon, who seems anything but indifferent to her feelings, but eventually reveals he is married. Another suitor of hers, poet Min-woo is repeatedly turned down, to the point that he starts drinking and behaving badly. Kwang-hee, an employee in Madonna (the name of the dabang), likes Min-woo and sleeps with him, but when he turns her down, her life takes an intense downward spiral. Before that, however, she turns against her employee the worst fashion, belittling her in the most offensive way possible. One day, Hyeon-hee learns that Sang-hyeon will leave on a business trip to the US, which is the same day the incident that led her to court happens. Her fate, expectedly, becomes even worse.

In an approach that lingers between the melodrama and the soap opera, Gwon Yeong-sun presents a number of stories that highlight the hardships women faced in the Korean society of the 60's. The most obvious one is the prejudice that permeated all aspects of society, from the professional to the social and everything between, with Hyeon-hee's story being the main medium comment. 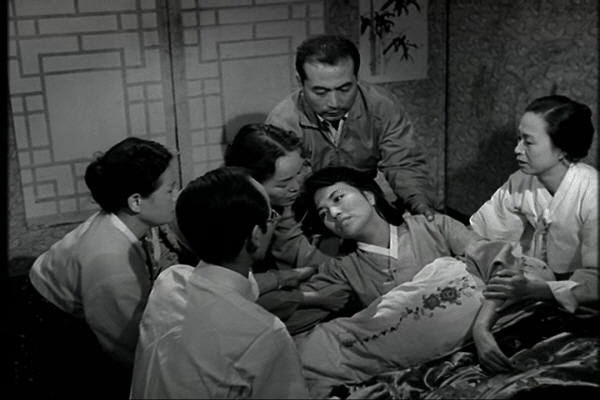 The many and various hardships women faced at the time are presented quite eloquently, with their lives without a man to protect and take care of them are unbearable, but the shocking part is that the film seems to actually accuse them for their fate, no matter how awful it is. In that regard, having a child out of wedlock and falling in love with a married man are presented as the reasons for the protagonist's growingly deteriorating state, with similar comments dealing with the rest of the female characters. Kwang-hee sleeps with a man without being married, while Soo-jeong decides that exploiting her body to get what she wants is the way to proceed in life, choices that eventually lead them to a fate that can only be described as purgatorial. Furthermore, Kwon shows that there is no friendship between women, as are all presented as eager to gossip and  take advantage of their co-workers. He also manages to absolve Lee Sang-hyeon, who in fact pursues Hyeon-hee despite that he is married, by having his wife telling her that their marriage is long since over in essence, and has not problem with what the two of them do. Lastly, the name of the dabang can only be perceived as ironic.

On the other hand, and despite these comments and the melodramatic/soap opera approach, the story is quite captivating, with the work done in the adaptation of Park Kyung-ni's novel by Choi Keum-dong, the direction and Lee Won-do's editing helping the most in that regard. Lee Seong-chun's cinematography captures the events with realism without any exaltation, allowing the story to be the main focus, although some of his frames, as the one with the slapping scene, are quite interesting. 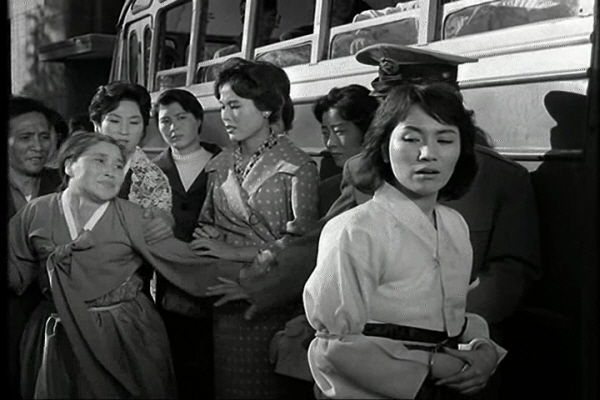 The acting is on a very high level, with the cast not succumbing to intense melodramatic performances, despite the main premises of the narrative. Moon Jung-suk in particular is exceptional as Hyeon-hee, in a rather nuanced performance that has her exhibiting a number of sentiments and psychological statuses with utmost artistry. Um Aing-ran as Gwang-hee is also excellent as the "villain".

#MeToo movement people will probably be overly frustrated with a film such as this, but if one can move beyond its chauvinistic comments, one will enjoy a very entertaining movie, which actually shows the way society perceived women at the time with accuracy.