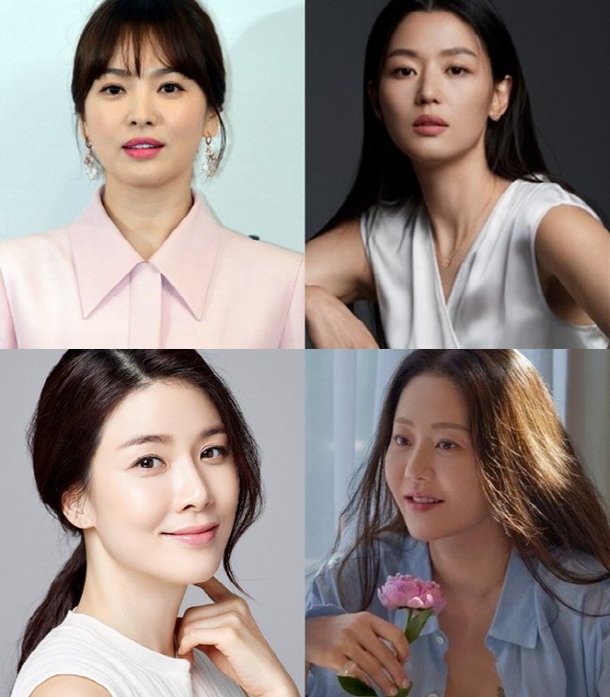 In 2021 several major actresses who have been active since the nineties will return for major projects- their first in some time. Song Hye-kyo is the most recent of these whose name have come up in connection with "The Glory" which will be written by "Descendants of the Sun" screenwriter Kim Eun-sook. The revenge-themed story will be a departure for Song Hye-kyo's romantic image which still lingers from her last project, "Encounter" which ended two years prior.

Jun Ji-hyun is facing a longer gap in her career, though, with her last leading role being from "The Legend of the Blue Sea" which ended four years ago. Motherhood prompted the stall in her career, but in 2021 Jun Ji-hyun will have two big name projects- "Jirisan" and "Kingdom: Ashin of the North" which are expected to have worldwide influence. The former drama, a modern day mountaineering mystery has had distribution sold to China while the latter, a zombie historical drama, will air on Netflix.

Go Hyun-jung last appeared in "Neighborhood Lawyer Jo Deul-ho 2: Crime and Punishment" in 2019. She too, will make a return this year in "Reflection of You" which will trade less on her star power as it will on the concept of an older woman making sense of her life. Go Hyun-jung still suffers from the circumstances surrounding her abrupt departure from "Return" where she was accused of physical assaulting director Joo Dong-min. Her reputation, though still weakened, has not yet collapsed.

Lastly, Lee Bo-young will come back with "MINE" later this year. Unlike the other actresses mentioned, Lee Bo-young has had no obstacles lately in regards to securing work. She made "When My Love Blooms" just last year. "MINE" will be a departure for the actress, focusing on passion more than melodrama. The prominent role of these leading ladies among others show that South Korean dramas have become more of a women's market, with age being of less importance than talent and name recognition.