Hyun Bin and Son Ye-jin Are Reuniting in Drama 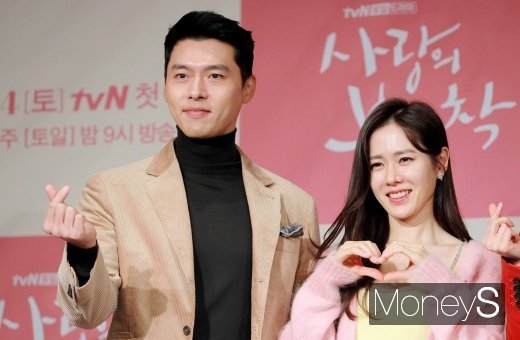 Hyun Bin and Son Ye-jin are coming back with the drama "Crash Landing on You", reuniting since the film "The Negotiation", which came out in September last year.

"Crash Landing on You" is a romantic drama about an heiress named Yoon Se-ri (Son Ye-jin) who lands in North Korea after a paragliding accident, and a North Korean general named Ri Jeong-hyeok (Hyun Bin) who tries to protect her, but eventually falls in love with her.

The press release for the new tvN drama "Crash Landing on You" was held in Seoul on the 9th with director Lee Jeong-hyo and actors Hyun Bin, Son Ye-jin, Seo Ji-hye and Kim Jung-hyun.

Hyun Bin and Son Ye-jin mentioned the romance rumors that circulated about them and said they didn't mind it at all. Hyun Bin said he 'laughed it over' and that it didn't affect his decision to be in the drama. He'd worked with Son Ye-jin before and he'd always wanted to work with her again.

Son Ye-jin said the same and said she didn't have an issue making up her mind.

Director Lee Jeong-hyo said, after the rumors, "I tried to look at it in a good way. That the chemistry would be good for the drama". He also showed confidence when asked about the expected viewing rate. "Since I haven't done a highly rated work so far, I've been thinking about how much it could be this time, and hopefully it's more than 10%".

"Hyun Bin and Son Ye-jin Are Reuniting in Drama"
by HanCinema is licensed under a Creative Commons Attribution-Share Alike 3.0 Unported License.
Based on a work from this source