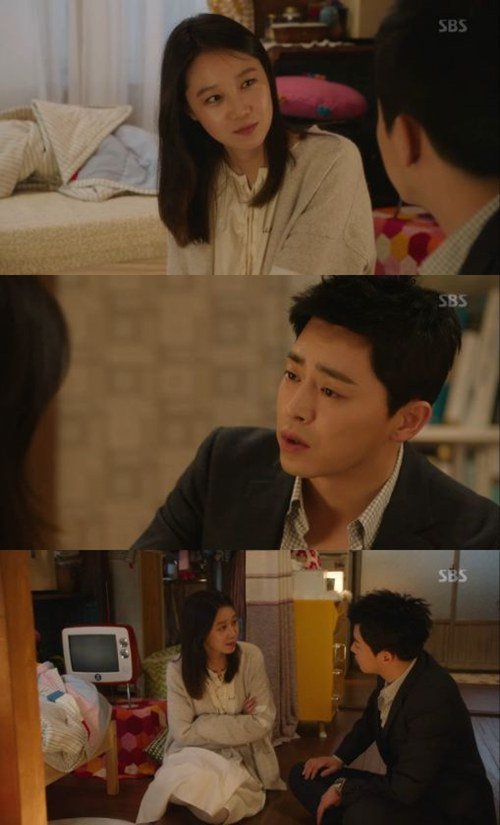 On the latest episode of the SBS drama "Incarnation of Jealousy", Hwa-sin (Jo Jung-suk) worried that they won't be able to have a baby and Pyo Na-ri (Gong Hyo-jin) comforted him.

Hwa-sin found out that he could be sterile and he drank to forget it. He went to Na-ri's house drunk and told her, "I went to a fortune-teller and she said we are not going to have a baby".

Na-ri said, "Who says that? Where is she? Let me ask her again. Is she famous?" Hwa-sin continued to be upset and Na-ri said, "We can go somewhere else and ask. If it's alright with you. Are you upset that she said we don't have a child and that's only one person? What time did you tell her my birth time was? 8AM? I was born at 8PM. It's wrong already. We should go next time together and not by yourself".

Hwa-sin asked her why she liked him and she said, "Because you're manly". He asked if that was all and if it was alright that he had breast cancer. "The fortune-teller said we can't have a child. I am a man with breast cancer who can't give you a child. Is that alright?"

Na-ri smiled as said, "You had breast cancer surgery so that's alright. We can find someone else who says we will have a child. What's the problem?"

"[Spoiler] "Incarnation of Jealousy" Gong Hyo-jin comforts Jo Jung-suk "
by HanCinema is licensed under a Creative Commons Attribution-Share Alike 3.0 Unported License.
Based on a work from this source