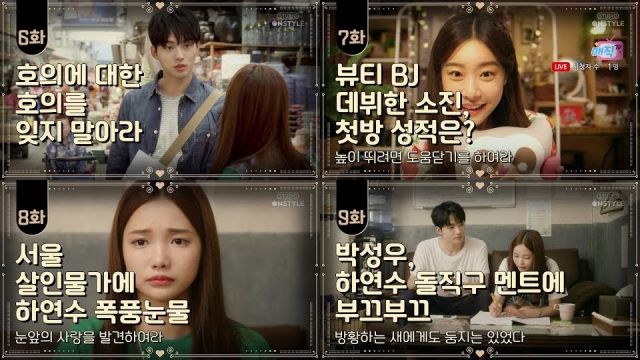 By the time we've finally gotten a clear explanation of what the goddesses are doing in Korea in the first place, "Oh! Goddesses of Doll-like Beauty" is basically over. Put together all ten episodes feel more like a pilot for a situation comedy than they do a single coherent story. But then, from the very beginning "Oh! Goddesses of Doll-like Beauty" has been going for style over substance.

And that style is mainly just in the form of how the four lead actresses are all attractive women who lounge around at home wearing togas. Metis deciding to run an online makeup blog is, by far, the most intuitive idea we get, because I can absolutely see her pulling in a strong viewership simply by virtue of the fact that she looks like a goddess. Whether or not Metis actually is a goddess is besides the point. Sojin is obviously not really a goddess, but she does look the part.

Aside from just the aesthetic appeal, the main strength of "Oh! Goddesses of Doll-like Beauty" is just in the sister-like bonding. I liked how, no matter what setbacks they ran into, the four main characters are always adamant about sticking together and sticking up for one another. Once again, regardless of whether they are literal goddesses, being a goddess internally mandates that one have a pure kind heart.

That doesn't really work in the context of the original Greek myths, obviously, but...ah, who am I kidding. The material in "Oh! Goddesses of Doll-like Beauty" is so transparently conceived there really isn't any way to get much more meaning out of it than what we see played out transparently on-screen. The adventures of the goddesses are presented in such a low-key positive manner there really isn't much to get out of their antics except maybe a smile while you're on the subway.

Consider how Peitho ends up working at a telemarketing company. That's...horrible. No person should have to endure a fate like that, let alone a goddess. Are we really just supposed to accept that this is the best Peitho can hope for, when the other three goddesses end up with jobs that at least help other people fairly directly? Well yes, yes we are, because even compared to the web drama standard, "Oh! Goddesses of Doll-like Beauty" is not a story that gets richer when you think about it on a deeper level.