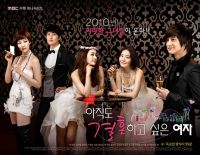 16 episodes - Wed, Thu 22:00
Synopsis
She has returned!
Lee Shin-young couldn't wait to get married when she was 32. But she's still single at the age of 36!
She hasn't found a soul mate yet nor has she found success in her career. Her unforgiving personality is worse than ever.
Now she's about to learn some hard lessons about life at the age of 36!

Lee Shin-young (age: 36) actress Park Jin-hee (A woman who can't wait to get married)
She's a media journalist. She's single and doesn't have a boyfriend but she keeps a positive outlook on life. As a senior journalist, she's on the top of the list of people to be fired in the next round of layoffs and so she's under a lot of pressure at work. She was on the verge of marrying her last boyfriend but that relationship abruptly ended. She later meets a cute doctor but things fall apart before she can even go out on a date with him. Just when she thinks that her marriage prospects are over, she meets a young guy who is 12 years her junior. They promptly fall passionately in love.

Jung Da-jung (age: 36) actor Eom Ji-won (A woman looking for the perfect man)
She's an interpreter. She's got it all beauty and intelligence. She is seeking a handsome guy with a high-paying job. Her goal is to get married within a year and she's looking around for a handsome, tall guy who has a salary in the six figures. She finds a doctor who fits the bill and they get married. But things don't turn out the way she expects them to.

Kim Bu-gi (age: 36) actress Wang Bit-na (An attractive single woman who?s past her prime)
Her occupation is a restaurant consultant. She provides consulting services to trendy restaurants that target female patrons. She broke off her engagement with her fiancé whom she dated for 10 years and because of that, people think she's a mean chick. So she decides to use the money she saved up for her wedding dowry to finance her overseas studies at a Swiss hotel management school. After she gets her degree, she becomes a highly-sought restaurant consultant. Then one day, a baby is abandoned at her doorsteps...

Yoon Sang-woo (age: 36) actor Lee Pil-mo (last romanticist)
He's a junior airline pilot and Shin-young former fiancé. As a romantic guy with a charming personality, he also enjoys sports. Although he still loves Shin-young, she's currently dating a guy who is 12 years her junior. He tries to rekindle his relationship with Shin-young to no avail. Then one day, he meets his female landlord who is married and 8 years his senior and they have a torrid affair. She also turns out to be the mother of Shin-young's current boyfriend.

Ha Min-jae (age: 24) actor Kim Beom (Homme fatal)
He's a talented musician who is enrolled at an elite university where he is a business major. He's a typical bad boy. He also gives dating tips to Ban-seok. When Ban-seok is spurned by Shin-young after using the dating tactics taught to him Min-jae, Min-jae takes things into his own hands and bets that he can make her his girlfriend. After wooing Shin-young with his smooth skills, he gradually develops intense feelings for her and confesses his love.

Episode 1
Shin-young's boyfriend proposes to her and gives her a huge diamond ring one day. But after their date, Shin-young has to return to work to do her night shift. When a fire occurs at a motel, Shin-young goes to cover the story live. But she is shocked to see her boyfriend inside the burning motel with another girl. After doing an excellent job for a client of hers, Bu-gi comes home to find Shin-young miserable over her cheating boyfriend and so she tries her best to comfort her friend. Shin-young decides to confront her boyfriend in the middle of the night and Bu-gi goes with her. When they arrive at Shin-young's boyfriend's apartment, they witness Da-jung in a drunken state and shouting insults towards her ex-boyfriend's apartment suite....

Episode 2
Shin-young's former boyfriend Sang-woo asks Shin-young to meet him because he has something to say to her. Thrilled at the prospect of meeting him, Shin-young goes to see him and he hands her a wedding invitation, telling her to attend his wedding. Shin-young gets furious over Sang-woo's thoughtless action.
A co-worker of Shin-young asks her to fill in a lecture engagement at a college as a substitute lecturer. In the room full of college kids, she meets Min-jae again. Min-jae gives Shin-young a lead on a possible news story. So she covers the story with his help. Then Min-jae asks Shin-young if she would like to go to a concert with him.

Episode 3
After breaking off his engagement with his fiancée resulting in the cancelation of his wedding, Sang-woo decides to meet Shin-young. Sang-woo asks her to forgive him for what he did and suggests that they get back together. But Shin-young flatly refuses and turns him away. Meanwhile, Ban-seok tells Min-jae that he has feelings for one of his patients who has partial paralysis of the face. Min-jae asks him if the patient's name is Shin-young.
Telling her friends Shin-young and Bu-gi that she knows a famous shaman who tells fortunes, Da-jung takes them to her. The shaman tells the group of friends that they need to have an exorcism to rid themselves of bad luck but it will cost them some money. In the middle of the exorcism that they paid for, an undercover TV crew appears and starts taping the shenanigans that are going on at the shaman's house.

Episode 4
On his business trip, Ban-seok buys a gift for Shin-young. Shin-young brings the gift home and her friends naturally think that it must be an expensive gift since Ban-seok can afford it as an Oriental medicine doctor. After Shin-young unwraps the gift and finds a box of chocolates, they're all disappointed.
Min-jae tells Ban-seok that he made a big mistake by giving a box of chocolates as a gift to a girl. Ban-seok retorts back that he'll never ask a girl out on a date again. Min-jae boasts that he'll make Shin-young fall in love with him and makes a bet with Ban-seok he'll succeed.

Episode 5
Shin-young is disappointed when a news story that she prepared is stolen by another reporter. Min-jae makes Shin-young promise that she won't cry over losing a news scoop nor will she let anyone steal her scoop from her again.
Bu-gi learns that the man she is dating has been telling people that he has never been married before, which infuriates her, so she goes to meet his wife. She goes to the man's home and is greeted by Sang-mi. Sang-mi gets upset when she finds out that Bu-gi was seeing her cheating husband but she also feels a kindred spirit in her.

Episode 6
Sang-woo sees Min-jae together with Shin-young. While playing darts with Shin-young, Min-jae wins the game and steals a kiss from her. Sang-woo then approaches Min-jae.
After Shin-young gets sullen and disappointed about her poor performance at work, Min-jae takes her to an ice rink where they get playful and take a tumble while skating...

Episode 8
Shin-young tries to believe that Min-jae really loves her but her friends tell her that she's being deceived and advise her to end the relationship. Shin-young then gets cuddly with Sang-woo in front of Min-jae but inside her heart, she is upset about her actions.
While pulling a strand of grey hair from Shin-young's head, Min-jae teases her about her hair getting grey so soon. Seeing how upset Shin-young is over her grey hair, Min-jae dyes his hair completely white.

Episode 9
Da-jung gets shocked after getting a warning from Ban-seok's father. Ban-seok goes to meet Da-jung and tell her that he'll persuade his father to relent and approve of their marriage. Min-jae dyes his hair grey so that he'll look older and about Shin-young's age. Shin-young suggests to Min-jae that they date for just 10 days. Sang-woo gives a gift he bought in France to Sang-mi, who is his new landlord.

Episode 10
Ban-seok bakes a cake for Da-jung on her birthday and proposes marriage to her.
Meanwhile, Sang-woo spies Sang-woo wearing slippers and a slip. He is transfixed and followed her...

Episode 11
Sang-mi wanders into Bu-gi's café, and bumps into Shin-young and Min-jae there. Sang-mi is stunned to see Min-jae with a shock of grey hair and starts berating him about it. She coldly tells him to return home and then leaves. Sang-woo confesses to Sang-mi that he thinks he's falling in love with her.

Episode 12
Ban-seok and Da-jung have their wedding and so Shin-young and Bu-gi stand in as her bridesmaids. After all the wedding guests leave, Min-jae and Shin-young are the only ones left. Shin-young invites Min-jae to her home and Min-jae asks her if he can stay for the night and then kisses her passionately.

Episode 13
Sang-woo suggests to Sang-mi that he'll go with her to meet her son when she breaks the news that she's in love with another man who is Sang-woo. Sang-woo is shocked to learn that Min-jae is Sang-mi's son and decides to turn his back on Sang-mi and pursue Shin-young relentlessly.
Meanwhile, Ban-seok forgot to bring the plane tickets to go on their honeymoon. So Da-jung and Ban-seok have to stay home...

Episode 14
Surprised to see Sang-mi at her door, Shin-young tells Min-jae to hide in Da-jung's room. Sang-mi gets serious with Shin-young and asks her when was the most difficult time in her life.
Meanwhile, Bu-gi and Da-jung are approached by a man who says he'd like them to appear in a TV commercial.

Episode 15
Sang-woo's mother visits Sang-woo and she meets Sang-mi. Sang-woo's mom says that she can't stop her from having a relationship with her son but she won't attend their wedding if they ever think about getting married. Sang-woo tells his mom that he'll make that decision together with Sang-mi.
Meanwhile, Shin-young's colleagues see Min-jae hanging out with his friends, some of which are young women, at a bar. So they take photos of him with the girls and send the picture to Shin-young.

Episode 16
Da-jung finds out that Ban-seok mortgaged the home to offer financial support to Ban-joo. Da-jung is furious that Ban-seok lent such a large amount to his brother without discussing it with her first. She demands that they move but Ban-seok tells her that he'd like to see her get along with his family and live together, which renders Da-jung speechless.
Meanwhile, Shin-young breaks up with Min-jae when he visits her at work. On the day Shin-young leaves on her two-year foreign correspondent assignment, Min-jae gets into a motorcycle accident. Shin-young learns about this while she's on the plane.

The Woman Who Still Wants To Marry | Cast

The Woman Who Still Wants To Marry | News

The Woman Who Still Wants To Marry | Shopping

The Woman Who Still Wants To Marry | Pictures

The Woman Who Still Wants To Marry | Videos | Suggest a video

The Woman Who Still Wants To Marry | Links | Suggest a link

The Woman Who Still Wants To Marry | Reviews

The Woman Who Still Wants To Marry | Facts

The Woman Who Still Wants To Marry | Community