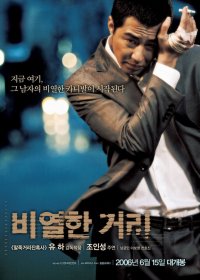 Byung-doo, the No.2 man in a small-time organized crime gang, leads an aimless and wild life. Life is hard for him since he is the sole support of his mother and two younger siblings. However, when Mr. HWANG asks him to embark on a secret mission, Byung-doo realizes that this is one chance he should not let pass by. The mission is dangerous, but success would mean that Byung-doo would no longer have to worry about supporting his family...

View all 111 pictures for "A Dirty Carnival"