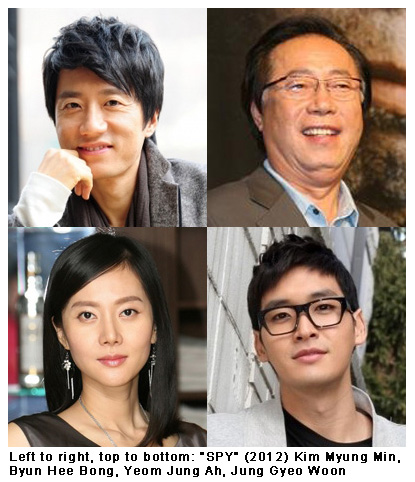 Casting has been announced for Kim Myung-min's latest project "Spy", a film that revolves around the lives of 5 North Korean agents in South Korea. "Spy" is written and directed by Woo Min-ho, who was also behind "Man of Vendetta" (2010). This movie marks the second collaboration between the method actor and the director-scriptwriter.

The film boasts a cast of well-known and established actors. Kim Myung-min's management agency, MM Entertainment revealed the official cast line-up lead by Kim Myung-min (39), who will play the role of Agent Kim. Agent Kim is a family man who lives a happy and contented life with his wife and two children. He is disguised as a manager in a company that sells fake viagra imported from China. Together with his three comrades, Agent Kang (Yum Jung-ah, 39), Agent Woo (Jung Gyu-woon, 29) and Adviser Yoon (Byun Hee-bong, 70), Agent Kim was sent to South Korea 10 years ago for a special mission.

Agent Yoon, also known as Adviser Yoon, is the oldest team member. He is unemployed and spends his entire day at the park. The role of Adviser Yoon will be portrayed by actor Byun Hee-bong (변희봉), one of the most-sought after veteran actors in Korea. He has done at least 20 TV dramas and 13 movies including "The Host" (2006), "My Girlfriend is a Gumiho" (Drama, 2010), "Master of Study" (Drama, 2010). "Spy" will be his second project with Kim Myung-min after "White Tower" (Drama, 2007) where he played the upright Professor Oh.

Agent Kang, the only woman in the team who lives as a real estate agent, will be portrayed by actress Yum Jung-ah (염정아). Yeom is a famous and established actress active in both films and television. Her last works are "JEON WOO CHI : The Taoist Wizard" (Movie, 2009) and "Royal Family" (Drama, 2011).

The final member of the team is Agent Woo, a lowly farmer who raises cows in the countryside. Agent Woo will be portrayed by television actor Jung Gyu-woon (정겨운). His latest works are "Salaryman" (Drama, 2012), "Romance Town" (Drama, 2011) and "Doctor Champ" (Drama, 2010). Jeong will be making his big screen debut with "Spy".

Rounding the North Korean agents is Agent Choi, the villain in the movie. Actor Yoo Hae-jin (유해진, 43) will give life to the role. Yoo is a notable film actor who has appeared in at least 30 movies. Some of his most famous works include "JEON WOO CHI : The Taoist Wizard" (Movie, 2009) and "Moss" (Movie, 2010). 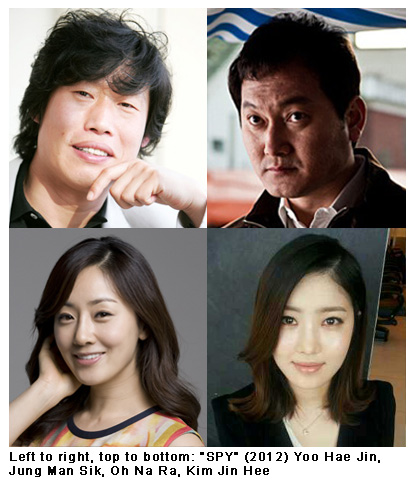 "Spy" will also feature Jung Man-sik (정만식) as the police investigator who will chase after Agent Kim and his team. Jeong is a well-known supporting actor most active in movies, but is recently more visible in the small screen. He is currently seen in "The King 2 Hearts" (Drama, 2012), and some of his known works are "The Greatest Love" (Drama, 2011) and "The Yellow Sea" (Movie, 2011). Other confirmed cast members are actress Oh Na-ra (오나라) ("Feast of the Gods" (Drama, 2012), "Dancing Queen" (Movie, 2012) who will play Agent Kim's wife, and new actress Kim Jin-hee (김진희) who will portray the role of Miss Go, a South Korean agent working undercover in Agent Kim's company.

Production started on 6 April in Seoul. Distributor Lotte Entertainment aims for a release before Korean Thanksgiving this year.

With special thanks to ljubov

"Casting announced for Kim Myung-min's "SPY""
by HanCinema is licensed under a Creative Commons Attribution-Share Alike 3.0 Unported License.
Based on a work from this source